I have mentioned a number of times before that when we moved to Italy I managed to reduce all of my embroidery supplies down to one single basket. I was rather proud of that achievement! I have also enjoyed the challenge of realising projects with what I have to hand rather than resorting to yet another craft buying spree.  All of this has been a good. I may dream of having a dedicated craft room one day but, whilst we live our slightly nomadic existence, I can make this work.

Despite all of this, the corner of the sitting room where I keep my embroidery stuff was becoming a bit of a problem.  There were two reasons for this.  Firstly, I will do at least a little stitching everyday so there is never a time when everything is fully packed away. Secondly, although I have cut back on buying supplies hugely, after a trip to London, there would often be a stash in my suitcase that looked a bit like this.

I needed to to stop being in denial and accept that my embroidery stuff no longer fitted into one basket. Whilst it all looked very tidy, I would have to pull everything out every time I wanted to make a start on something. My husband bought me a set of boxes a couple of weeks ago.  It was quite funny (and probably sums the two of us up quite well) when he turned to me and said, “Don’t you want to get started on organising your embroidery stuff right away? Surely that’s the fun part?!” Aw! I laughed as I tried to explain that the stitching is the fun part, not the tidying and organising.

Anyway, I got a grip on myself yesterday and got on with the organising. I took everything downstairs to the garden and spread it out on the table there. The garden is shared with the people downstairs so I reasoned to myself that I would have to stay and finish job without finding some excuse to leave it half done! 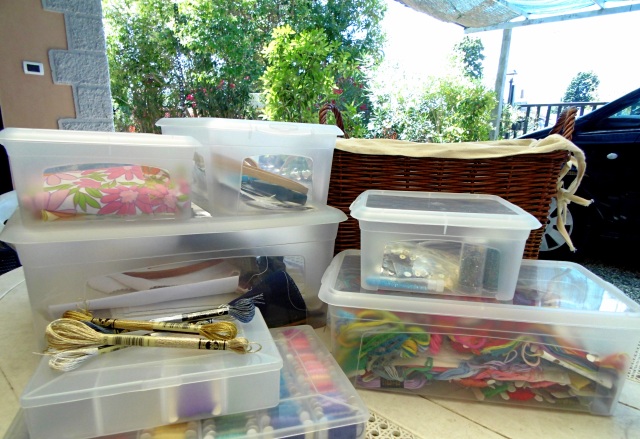 It worked! And it took much less time than I thought it would. I now appear to have a box for everything. A box for my coded floss, a (huge) box of ancient, uncoded floss), a box of hoops of various sizes…..and so it goes on.  I now don’t need to rifle through everything to find a 4″ hoop – I just need to rummage in the hoop box.  I know – genius 😉.

The other bad habit I have is collecting things that inspire me.  For example, my eye was caught by these sugar sachets in Verona last week so I kept the empty packaging.

I realised, if I wasn’t careful, I would be in danger of disappearing under a pile of detritus. Pretty and inspiring detritus, but detritus none the same. So I have now decided to photograph these things rather than carry them with me. This was probably obvious to all you creative types but it took me some time to figure out this was a much more sensible way of doing things!

Hmm, I think I may need to buy more Dropbox space now.  I may have the embroidery stuff organised now but the photo storage is another matter entirely!